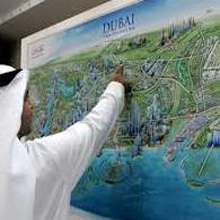 The nerve wrecking financial crisis is over in the UAE, helping its realty market regain its grand and iconic stature. Dubai real estate is back in business and the investors and developers too have sensed it. The interest of financial institutes and investors in Dubai property market is reflected in their willingness to try their limits once again with various new mega projects. This post discusses some of the recently announced mega projects that perfectly exhibit how things work in Dubai real estate.

Dubai wants everything that attracts tourists, including the Taj Mahal. The replica planned for Dubai is called Taj Arabia and it would be four times bigger than the original one. The estimated cost of this project is $1 billion. Taj Arabia project, planned for one of the theme parks at Dubailand, includes a hotel, various shops and serviced apartments. Since Taj Mahal is a grand symbol of love, Tah Arabia will also serve as a wedding venue. The project is expected to complete by the end of 2014.

The announcement of these mega projects has forced some people to think that Dubai is again on the track that led it to suffer heavy financial crisis of 2008, while others see it as a major and clear sign of recovery.

Leave feedback using the form below.

Enable/disable the mobile view of the website for smaller browsers.